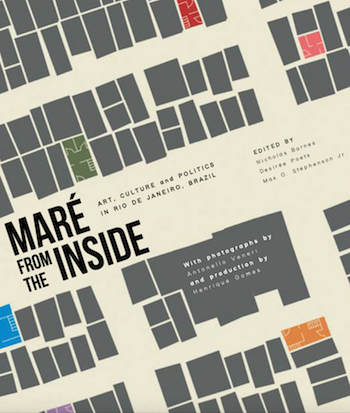 Maré from the Inside

With photographs by Antonello Veneri and production by Henrique Gomes

Complexo da Maré is a group of 16 contiguous favelas and housing projects in the northern zone of Rio de Janeiro. Home to an estimated 140,000 individuals, Maré is Brazil's largest agglomeration of favelas. Often depicted in a negative light, these favelas are in fact vibrant and diverse communities, as revealed in this remarkable book.

Maré from the Inside: Art, Culture and Politics in Rio de Janeiro, Brazil is a companion to the exhibition of the same name (Portuguese: Maré de Dentro), which was developed by an international team of Brazilian and US academics, activists and artists. The exhibition documents the lives of residents of Complexo da Maré through family portraits, street photographs, documentary films and written works.

Featured in this book is a selection of the exhibition's photographs by Italian photojournalist Antonello Veneri, who worked closely with Maré resident and activist Henrique Gomes over the period from 2013 to 2019, during which Rio was home to the 2014 World Cup and 2016 Olympic Games. These photographs, simultaneously personal and deeply humane, counter long-standing and powerful stigmatizing narratives, demonstrating instead the diversity and resilience of these communities and exposing the barriers residents confront in their everyday lives.

Providing context to the photographs are essays by the exhibition's creators, curators and collaborators, including Maré resident and scholar Andreza Jorge, who asks what it is about the Maré de Dentro exhibition that has made it so compelling for so many people from very different parts of the world. The answer lies in the power of art to make us rethink prevailing social frames and, in turn, embrace fresh political and cultural strategies for integrating previously marginalized communities more fully into political and social life.

The MARC records for VT Publishing books can be downloaded here.

This book has not undergone external peer review. See our Peer Review Policies for more information.