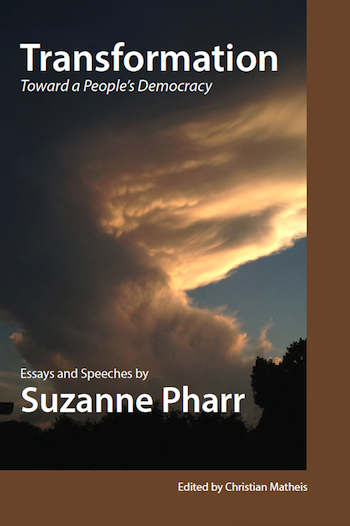 Toward a People’s Democracy

Transformation: Toward a People’s Democracy is a movement book for anyone working for an expansive vision of social justice. Here Suzanne Pharr offers a clear and compelling vision for action amid social and political turmoil. Drawing on decades of work on the frontlines of social movements, Pharr’s writings create a real-time chronicle of on-the-ground organizing and the historical significance of struggles for freedom and democracy. Pharr, a Southern queer feminist and anti-racist organizer, explores the pitfalls and the strengths within social justice movements. Her writings reflect the interchange of ideas and the collective work of thinkers and organizers who led activists to lift up the liberation of gender and sexuality, to fight both domestic and state violence, to advance anti-racist strategies and the leadership of people of color, to work against the advancement of rapacious capitalism, and to confront the rise of the Right in all of its forms.

Transformation examines not just what happened but how it happened in the battles against numerous forms of oppression including economic injustice, racism, sexism, heterosexism, transphobia, and nationalism. Taken together, Pharr’s writings give activists and scholars a way to understand decades of attacks on civil rights while offering a roadmap that shows the way toward a people’s democracy where everyone has full participation, voice, a fair share of the benefits, justice, and dignity.

Suzanne Pharr is an organizer and political strategist who has spent her adult life working to build a broad-based, multi-racial, multi-issued movement for social and economic justice in the United States. She founded the Women’s Project in Arkansas in 1981, was a co-founder of Southerners on New Ground in 1984, and was director of the Highlander Center from 1999 to 2004. After six decades of working across movements, Pharr now thinks of herself as a political handywoman, engaging with activists of diverse races, genders, sexual identities, classes, ages, abilities, and cultures to develop strategies for justice and equality.

This book has been peer reviewed. See our Peer Review Policies for more information.